With a bit of training, most pupils can explain why a writer uses a certain word. You know the kind of thing I mean:

Dickens uses the word ‘clutching’ to portray Scrooge as a miserly and selfish character. ‘Clutching’ suggests he doesn’t want to let go of the money that he has in his possession, which makes the reader feel as if he lacks generosity and only thinks off his own needs.

Which is fine, as far as it goes. What pupils tend to be less good at, in my experience, is exploring and, especially, evaluating the choices of diction that writer’s make every time they craft a sentence. Put simply, pupils often forget that writers have a wide vocabulary at their disposal and make deliberate decisions about the precise words they select, consciously or otherwise. It’s obvious to us, but pupils sometimes don’t grasp (or clutch? No, that wouldn’t make sense) that characters are therefore constructs, shaped by the writer’s imagination and the words that are used to describe them go on to define them.

Students can be trained to explore choice of diction through alternative interpretations of the same word or phrase. If done well, this can develop their analysis, like this:

The word ‘clutching’ can also mean an action where a person tries to grab something that belongs to someone else. So, in this case, Scrooge can be seen as self-centred but also actively trying to take wealth from others.

Sometimes, however,  this type of exploration can be come mechanical: pupils search for alternative interpretations when the first interpretation is the only plausible line of analysis. A more fruitful form of exploration, I find, is exploring alternative word choices, explaining why the writer didn’t select them, and evaluating the diction that the writer eventually plumped for.

As a class, we often discuss these choice. For that reason, I prefer to do this exploration graphically on the board; I’ve inadvertently ‘invented’ a type of thinking map – a word spectrum line – that I think does the job well.

Let me give you an example. The play DNA by Dennis Kelly includes a juicy little quotation by Cathy, one of the play’s potentially psychopathic characters – ‘I threatened to gouge one of his eyes out’. 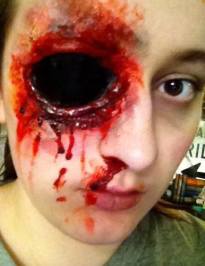 Left to  their own devices, most pupils can tell me that ‘gouge’ shows how violent she is and how she wants to intimidate the other character involved. But when we look at where that verb fits on the spectrum of choices for an action that involves removing an eye, things get more interesting:

Every time I’ve used this technique, despite much wincing at the grotesque direction of the discussion, I’ve found my classes really get to grips – if you’ll pardon the pun – with Kelly’s choice of verb. We talk about how ‘gouge’ is really nasty as it is done with the fingers (like ‘yank’ we feel), which implies lasting damage. Unlike the more neutral ‘remove’ or the gentler sound ‘pop’, although one pupil felt that the plosives suggested an unpleasant sense of force. Recently, my Year 11s could only come up with ‘claw’ or the Shakespearean ‘pluck’ as potentially nastier alternatives. Then we wrote a paragraph explaining the writer’s choice, the precise effect, discarded alternative diction and evaluated the overall decision. The standard of analysis was significantly better than the first attempts.

In passing, I shared this technique with my colleagues the other day and they were much taken with it. The next day I popped into a couple of other lessons where it was being used in KS3 classes to explore writer’s choices in other texts.

I’ve got the feeling that this technique could prove useful in the ongoing battle against the GCSE English language evaluation question. Or would ‘war’ work better? Definitely not ‘skirmish’…