This is a guest post by Jamie Edgecombe, a brilliant English teacher I work with who doesn’t really do Twitter. He’s the only person I know who doesn’t have a phone. Or a telly. I’ve been trying convince him to share his wisdom in blogs but he’s been too busy writing a novel and finishing his PhD. Finally, he’s cracked and this piece doesn’t disappoint: 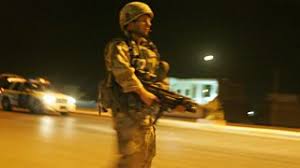 Combat is chaos. Read or listen to any number of interviews with combat veterans[1] and a trope that emerges is the chaotic experience that erupts when someone is trying to kill you and you are, ultimately, trying to kill them back. Senses are overloaded. The threat of death, injury and failing one’s comrades can be crushing and, as modern psychology has proven, carry long terms effects[2].

Whether instinct takes over, training kicks in, or you maintain a strategic mind (some people can – many cannot), actions are taken under fire. Often, circumstances force themselves upon you. They change unpredictably and do so quickly. You react, react again, get it right, or wrong. These dynamic experiences are faced in all war zones and ‘types’ of war because war, no matter the strategic conditions, and by its very nature, involves killing people. That means creating situations where this can be achieved on your terms, or facing scenarios whereby the enemy has the upper hand.

That said, it is not always the case that the frontline soldier is thrown into combat situations. In guerrilla conflicts and police actions, not all orders involve directly engaging in combat situations. Amongst the myriad duties undertaken by different armed forces, there are logistical missions, guard duties, escorting non-combatants, and policing activities: any of which could prove fatal. Mortar attack, sniping and, of course, ambush can bring chaos and death down upon your head. Moreover, not all combat missions result in contact with the enemy. For example, not even the wide spread use of ‘search and destroy’ missions in the Vietnam War[3] meant that American troops encountered the enemy. Most often they did not. Why? Because a guerrilla force, or an army that knows it cannot match its enemy in terms of firepower and / or logistics, withdraws to fight another day and on its own terms, relying on booby traps and sporadic attacks, often to purposefully inflict psychological damage.

Simon Armitage, in his poem Remains, explores the traumatising impact of frontline service, especially the impact of such chaos and the regret that can surface after participation in a violent event. There are few contextual markers within the poem itself to give away which combat theatre the persona is remembering and “talking about” (the poem is a lyric in the monologue form, after all), but the references to ‘sand’ and the knowledge that Armitage took his inspiration from his interview with Guardsman Tromans can safely leads us to read the poem through the lens of the Second Iraq War (2003-2009). What such a contextualisation means is that we can understand the shooting in terms of the persona’s experience of urban warfare, like that experienced by British troops in Basra, where insurgents used guerrilla tactics and where there was also a great deal of lawlessness. For the British soldier in Basra, death or mutilation could come from any quarter and at any time.

Trauma theorists, such as Judith Herman, have provided medical experts with useful symptomologies for understanding how trauma can manifest within victims and disrupt their psyches. Novelists like Toni Morrison, short story writers like Tim O’Brien[4] and poets, like Simon Armitage have, in turn, adopted and transposed these symptomologies into their written works. Trauma narrative has become its own genre. What Armitage’s poem brilliantly portrays is the damaging impact of doubt, of the confusion that operating in a combat zone can inflict, and how such morally liminal experiences can linger on in a victim’s life.

Many study guides provide a detailed commentary on the poem’s imagery and form. What I would like to present next, and briefly so, is how Armitage evokes the traumatising collision between violence and doubt.

Immediately, Armitage provides the experience’s situational context through the line ‘On another occasion, we got sent out to tackle looters raiding a bank.’ Here, the fronting of the prepositional phrase foregrounds the fact that the mission is one amongst many, and, as the passive verb phrase ‘got sent’ makes clear, soldiers on active duty are at the behest of their superiors. One can interpret the purpose of the line in terms of contextualisation: 1) the mission is given (they will be facing looters, not conventional enemy troops, or insurgents, although robbery and extortion were weaponised by the insurgent groups within Iraq); 2) the mission was “memorable” (it stands out from many because it has become one of the persona’s traumas). However, given that trauma can be accumulative, the prepositional phrase, in conjunction with the passive construction, work together to evoke the disempowerment faced by the persona. While placing him “again” in a threatening situation, a clear enemy will not be delineated. Disempowerment, whilst under threat, and in a situation where threat is a continuous presence (accumulating over time), are all triggers for trauma.

Furthermore, ‘tackling looters,’ is not a situation where military training is going be of much help. As documented in the British press, British soldiers were not an effective policing force in Iraq. They were highly trained combat units. Due to this, instances where looters were killed were reported in the press[5], despite laws of engagement stating that ‘offensive action must only be directed against military objectives.’[6]

Is the looter armed?

Languages have the amazing capacity to express that which is beyond immediate experience or direct access through memory. We can hypothesis, interpret, desire, imagine, reason, demand. Modality, on a basic level, is a category in linguistics which concerns expressions of possibility or necessity[7]. Grammatically, we can make statements that express truths, or about what which we believe to be true. These statements of truth can declare a sense of certainty, but also probably (low or high). There is a continuum of belief. This branch of modality, that concerns itself with truth, in all its degrees, is called epistemic modality.

Epistemic modality provides a useful lens when examining the doubt haunting Armitage’s persona in Remains. Take these statements, for instance:

‘And one of them legs it up the road, probably armed, possibly not.

so all three of us open fire.

Look at the different shading of the epistemic modal adverbs in ‘probably armed, possibly not.’ Both adverbial phrases are lightly shaded and, as such, reveal the voice’s sense of confusion. Was the man a threat or not? This is a common doubt war zones and can lead to internal conflict. However, Armitage’s nuanced structuring of the line, reveals a grim, if repressed, possibility: ‘possibly’ is lighter (less certain) than ‘probably.’ Grammatically, or semantically, there is a greater likelihood that the looter was not armed. An unarmed civilian (criminal though he maybe) has been killed; a war crime has been committed. As such, deflection (he might be armed) slides into guilt (he probably wasn’t).

Moreover, the rhetoric of affiliation, as evoked by the similar morphologies of ‘possibly / probably’ (with the attendant alliteration etc), just does not hold up. In other words, these adverbs do not mean the same thing, nor carry the same semantic weight. The guilt is dissolving the supposed rationality that hovers behind the idea that the looter could have been a threat and therefore he could have been engaged under the rules of engagement. Such trauma, as caused by exposure to another’s mortality, at one’s own hand, cannot be countered by the promotion of sanctioned killing.

Interestingly, what the proceeding two lines reveal is that the persona did not act alone – ‘somebody else and somebody else are all of the same mind.’ The same mind? What does this mean? Military training took over? That the sense of threat and fear permeated the unit? That violence has become a communal way of life? Does the dissemination of blame dilute the poem’s evocation of guilt (legally or in terms of regret)? No.

Additionally, within a poem so sharply focused on precise imagery, despite the ambiguity haunting the persona’s motivations / actions, when the looter is finally carried away, no confirmation is made about whether there a weapon or not. We are left with a kind of moral aporia.

Whether reference to a weapon was mindfully omitted by Armitage or not is inconsequential. The lacuna exists: the doubt exists, a doubt burning at the centre of the voice’s trauma. Such a missing detail could be viewed as psychological constriction, where the victim attempts to suppress elements of the traumatic experience (this can be mindfully employed, or unconscious). Such a view is supported by Armitage’s inclusion of other references to symptoms of constriction, like ‘the drink and the drugs’ that ‘won’t flush him out.’

Most often constriction is unsuccessful. The events come back through various forms of psychological intrusion. The ‘blood shadow’ lingers, as a literal blood stain at first, then a stain on the voice’s consciousness, the euphemistic nature of ‘shadow’ failing to drive the looter into the past, into memory and obscurity. How can it? Even in the persona’s sleep, he relives the event all over again. The past punctures his present and nightmares are a notorious symptom of intrusion. Significantly, within these dreams, alongside the experience’s vivid evocation through imagery (the sharpness of which is demonstrative of hyper-arousal), we have a key repetition, as the looter ‘bursts again’ out of the bank: ‘he’s probably armed, and possibly not.’ It does not matter, in terms of the ‘[d]ream.’

[1] As well as the well represented genre of military biography and autobiography, Youtube has provided a platform where hundreds of veterans’ stories can be accessed and the voice of the men themselves. See, for example, the Billings Gazette’s Vietnam Voices, amongst many.

[2] See the work of Judith Herman, such as her Trauma and Recovery: The Aftermath of Violence: From Domestic Abuse to Political Terror (2015, Basic Books)

[4] A number of O’Brien’s novels also explore the lives of servicemen traumatised after having had fought in Vietnam.

[6] Whether this rule included armed looters I do not know. The U.K. Government’s document pertaining to rules of engagement is available on line, but is still heavily censored. See https://assets.publishing.service.gov.uk/government/uploads/system/uploads/attachment_data/file/689834/iraq-rulesofengagementforoptelic_mod-83-0000142-z_.pdf

Moreover, in the Rules of Engagement for Soldiers document, the chapter concerning the protection of property, no mention is made of how to tackle looting. See https://assets.publishing.service.gov.uk/government/uploads/system/uploads/attachment_data/file/619906/2017-04714.pdf