The end of an era is upon us. The next week or so will signal the demise of Of Mice and Men. The old stalwart has become second nature to a generation of secondary English teachers, who, by now, can regurgitate not just lengthy quotations but also page numbers, obscure historical facts about the suitably vague time period ‘1930s America’, and quite possibly, at a push, Curley’s wife’s bra size.

That’s not strictly true of course. Not the bit about Curley’s wife but the part about the end of Steinbeck’s classic novella. It’s a GCSE goner but will no doubt live on, in a two-fingered gesture to Gove, a KS3 staple, rescued from the obscurity of the back of the dusty departmental book cupboard. 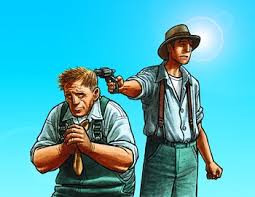 Yet the sense of an ending is nonetheless tangible. I’ve certainly been looking for ways to squeeze every last drop out of the ‘green pool’ before Lennie starts polluting it with his equine/ursine/ovine drool.

In the last couple of weeks I’ve approached OMM or, if you prefer OMAM, with renewed vigour: a condemned prisoner planning his Death Row valedictory meal. So we’ve approached context with greater sophistication, using quotes from Howard Zinn’s scintillating A People’s History of the United States and applying the poetry of the oppressed, courtesy of Langston Hughes’s seminal ‘A Dream Deferred’. The best results of all came from analysis, appropriately enough, of the ending itself, alongside the ‘other’ text from our modern texts exam (DNA by Dennis Kelly).

This week, I’ve introduced my Year 11 class to the concept of aporia. David Lodge, in his wonderfully erudite yet accessible book The Art of Fiction features a chapter on this literary device. Lodge defines aporia as a Greek word meaning:

‘”a pathless path”, a track that gives out. In classical rhetoric it denotes real or pretended doubt about an issue, uncertainty as to how to proceed in a discourse.’

He then goes on to summarise how aporia (‘often combined with another figure of rhetoric, “aposiopesis”, the incomplete sentence or unfinished utterance, usually indicated by a trail of dots…) is used by authors to act as a narrative device for the following reasons:

Discussions about aporia rather than the imprecise word ‘endings’ led on to the following valuable digressions:

I then  asked pupils to look at the last page of OMM and DNA and write an analytical paragraph explaining why the texts end as they do, with the charmless Carlson, rather than sensitive Slim’s offer of a drink; and why the aimless stage directions of DNA: ‘No answer. They sit in silence.’

Here’s what some of them came up with: 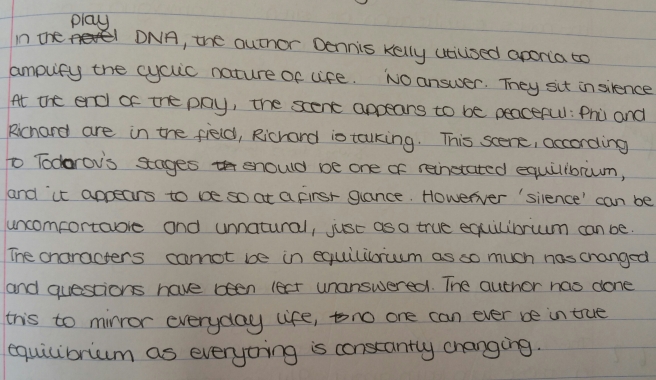 And this clever joker (note the structural use of aposiopesis): 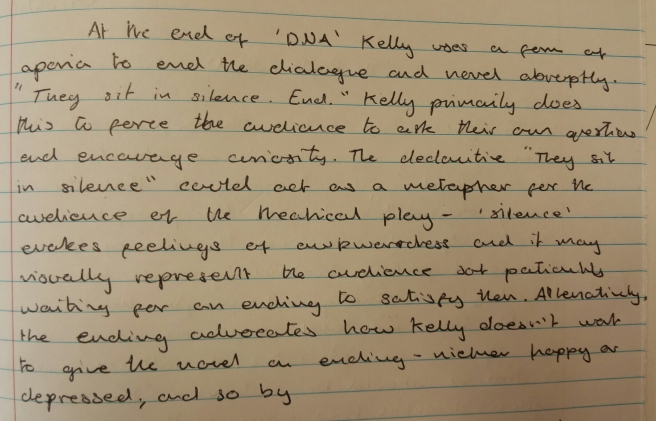 Out with a bang, then (sorry Lennie). OMM might be a moribund text but, for me, aporia lives to fight another…

3 thoughts on “The Sense of an Ending”